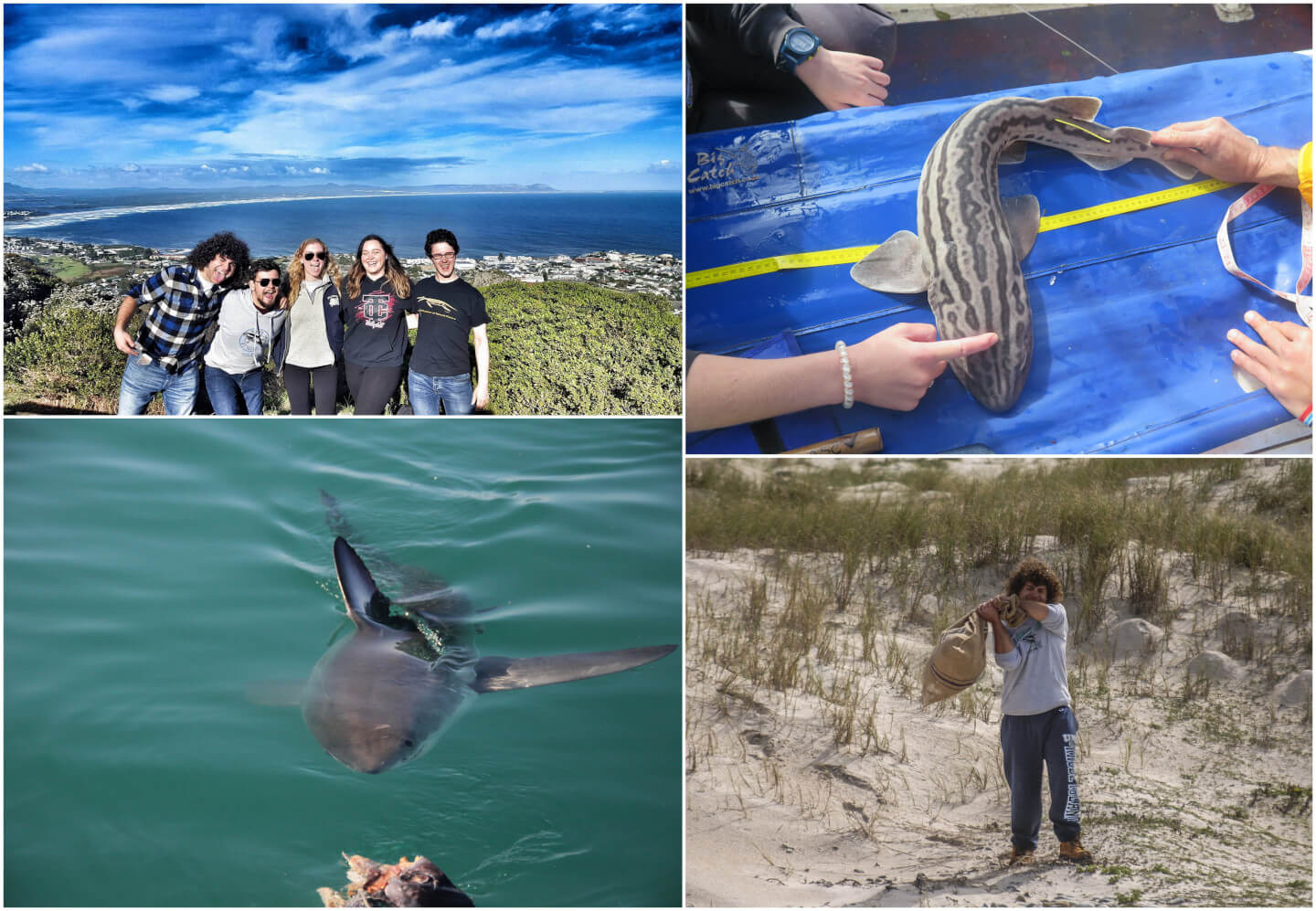 Hello! My name is Michael Blanco and I am  from upstate New York in the United States. I first heard of the White Shark Diving Company last summer, when my university’s Marine Biology Coordinator emailed me to detail the opportunity. As a Marine Biology major and major shark enthusiast, I immediately applied to be a part of the team. To my absolute delight, Mary graciously offered me the opportunity to travel to South Africa and work with her and the rest of White Shark Diving Company. I then started preparing myself for what was going to be the greatest experience of my life thus far.

After several months and a 17 hour plane ride, I finally arrived in Cape Town. I was completely taken aback by the beauty of the country. It was like nothing I’d ever seen. After a day of exploring and a goods nights rest, it was finally time to head to Gansbaai. Upon arrival, I finally got to meet Mary and learn what we were to be doing that day, which was going right out onto the cage-diving boat. Words cannot express how excited I was to finally see Great White Sharks, my favorite animal, in it’s natural habitat, with just a metal cage separating us. However, we were informed by Mary that recently, orcas had unfortunately killed 3 white sharks, resulting in a decline of sharks in the area. It was sad to hear, and I was worried that we wouldn’t see any sharks that day. I couldn’t have been more wrong.

Once we got out into the harbor and anchored, it took only about an hour before I heard what I had desperately hoped to hear, “Shark on the bait!” I immediately got my wetsuit on and jumped into the South African water, or, as Mitch refers to it, the frozen food section. It didn’t take long for me to adjust to the icy 13° C water, as my anticipation to see the shark rose. It was a bit shy, but eventually, it made a pass right in front of the cage in clear view. It was the most amazing thing I had witnessed thus far.

That day, there were 4 individual sharks that came around the boat. The crew regarded it as the best day they’d had in weeks following the orca attacks. I couldn’t believe my luck. We went out the next day as well, again seeing plenty of sharks, 3 individuals. Being in the cage just a few meters from the most powerful predator in the ocean is truly a humbling experience, and strengthened the already deep respect and passion I posses for these animals.

Recently, we also went out on the research vessel, where we fished for smaller sharks. It was great learning how to set up and use the rods, casting them into the sea and seeing what sharks would bite. I unfortunately didn’t hook anything, but some of the other volunteers, Mary, and Imke caught plenty. 9 sharks were caught in total, a great fishing day. It was exciting to see the sharks so close up and feel their muscular, powerful bodies. Even these small sharks posses a surprising amount of strength. It was difficult holding them in place while we took the necessary data to learn more about these beautiful animals.

The highlight of the day was when I was given the opportunity to tag my first shark ever. The shark, a Dark Shyshark, was a bit squirmy, but I managed to get the tag in just right. It was great to contribute to the study of these animals, as we know so little about them.

In recent days, the hurricane that hit the Western cape has prevented us from going out to sea, but we’ve still had plenty of activities to take part in. One of the days, we analyzed recent data from the cage-diving boats and fishing trips, organizing into the company database. One of the really interesting parts of the data analysis was the fin identification for the white sharks. As every white sharks has unique notches on it’s dorsal fin, we were able to use photos from the database to determine if sharks spotted on the boat had been seen previously or were newcomers to Gansbaai. It was very cool to discover a new shark that hadn’t been seen before and add it to the immense database.

We also did a cleanup on the local Franskraal Beach. While it was a very clean beach comparatively, we still managed to collect a good amount of rubbish that careless people had left behind. We walked a good 3 miles of beach collecting anything that could potentially harm the ecosystem, including plastics, fishing line, rope, bottles, and other garbage. It was great to make a difference in the community while also taking in the beauty of the beach and the environment surrounding it. We performed the cleanup to support 7SEASROPE, a local company dedicated to using old fishing line, rope, and other materials to create bracelets and sell them to bring awareness to the amount of trash we litter out beaches and support creative ways to recycle it. They are a great company and it was a great experience cleaning up such a beautiful area.

Overall, these first couple of weeks with the company have been incredible. I cannot thank Mary, Imke, Mitch, and everyone else in the company enough for allowing me to participate in such and incredible volunteer program and welcoming me as a part of their team. I cannot wait to see what experiences the next few weeks hold and to continue working with the White Shark Diving Company!