To determine the genetic structure of the white shark population around the South African coastline and, by including data from animals sampled elsewhere in the world, to provide new insights into white shark evolution at the global scale. Mitochondrial and microsatellite analyses were performed on 302 free-ranging white sharks collected from five sites along the South African coastline. This was augmented with 58 GenBank sequences originating from five distinct global populations. Genetic diversity, local population sub-structuring analyses and global phylogeographical patterns were determined.

Please contact us directly on institute@sharkcagedive.com to request a copy of this paper. 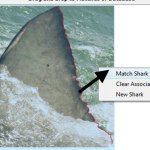