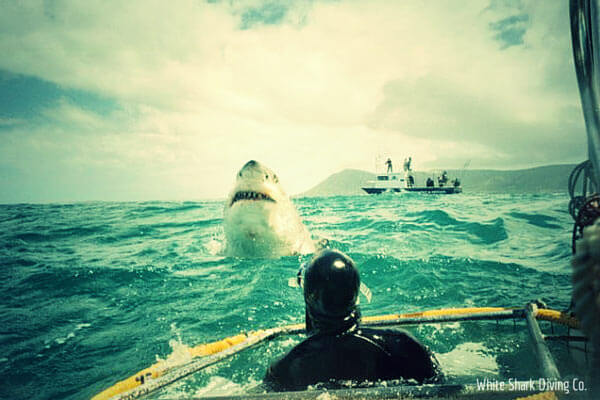 These guys are one of  companies that have a good name in the industry.  They are one of the first to advise you if the weather is not very good so you can reschedule your trip. They also take smaller groups, and in our case do private charters, which I highly recommend.

Their crew are very experienced. The Captain of the boat is highly qualified and is known as the skipper who has the most experience in these waters. His crew consist of a qualified Dive Master, an English and French speaking tour guide and videographer, and a deckhand.

We went on a day which was absolutely breath taking. We got to dive with 7 Great White sharks and were informed of the various other wildlife in the area that we saw. Pelagic birding to seals and penguins on the local island, Dyer Island next to Geyser Rock. I believe Southern right whales migrate to these shores from July to November. Known as the Southern Right as they were the right whale to hunt in bygone years. We were a bit early in the year to see whales.

Back to the Great Whites which we saw plenty of,  including a massive 5 metre gracious and majestical creature. The visibility was about 4 metres which is not bad for these waters. The water  was a chilly 16 degrees C but warm enough to take advantage of the good shark diving activity and a second dive session. Every shark we saw, we were advised by the dive master which side of the cage it was coming from, and how big it was. That five metre one looked like a 7 metre one through my goggles that’s for sure.

If you do a private charter and the shark activity is good, you get to dive various times which is fantastic. And the crew are your private beck and call for the entire trip which lasted nearly three hours at sea.

I would just like to thank the land and sea crew, on board their boat known as The White Shark, for our perfect day. We didn’t leave your perfectly situated crew house overlooking the slipway harbour, for hours that day.