Human animal interactions research paper: Quantifying the impact of human animal interactions especially those when there are unfavourable judgments on a charismatic species such as sharks, can help with species conservation. One example might be the negative impressions of interactions between humans and sharks. Attempts to conserve and protect a species are more likely to succeed if the general public supports the conservation campaigns. When society has an emotional reaction to the death of an animal, such as a whale, that emotion drives action and will ultimately lead to greater protection of species at an impactful level. This is not the case for sharks as they have been demonized by the media. In this study, we used six pertinent statement tests to compare how people saw the white shark, Carcharodon carcharias, before and after controlled human contact with it. From Kellert’s typology of human attitudes toward animals, questions were adapted. In order to determine whether there can be a change in perception in 322 visitors who were taking part in white shark cage diving trips in Gansbaai, South Africa, were subjected to two surveys (before and post-experience). We concentrated our efforts on evaluating how shark cage diving tourism activities could alter people’s unfavourable attitudes.

Please contact us on institute@sharkcagedive.com to request a copy of this paper. 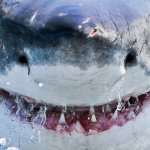