Kelp is the largest and fastest growing brown algae, which grows in ‘underwater forests’ (kelp forests) in shallow areas. In South Africa, kelp forests are a major ecosystem that dominates the nearshore subtidal zone from Namibia to the South East coast of South Africa. You will find two main species along the coast, Ecklonia maxima and Laminaria pallida. These form the canopy, and they are mostly a few metres tall, although Ecklonia can grow up to 17m.

Kelp forests provide a source of food and shelter to a variety of species including fish, crayfish, sea cucumbers, limpets and filter feeders, so they are incredibly important ecosystems. However, kelp forests are thriving around southern South Africa, and in Van Dyks Baai (Gansbaai) it is no different. Over the last few years we’ve seen kelp forests growing to levels not seen before, which we believe could be disrupting the great white sharks natural movement patterns and disturbing their hunting grounds in our bay.

Specifically, this has been observed around Dyer Island and Geyser Rock (home to our seal colony), an area that has been recognized as a ‘hotspot’ to view great white sharks for many years. Shark Alley, the famous stretch of water between Dyer Island and Geyser Rock, which is renowned for the presence of white sharks (hence the name), is unfortunately overgrown with kelp. We no longer find sharks in shark alley and we do believe this overgrowth of kelp forests has made the alley inaccessible to the sharks.

The area North of the Island known as the Geldsteen (which translated into English, means Gold Reef or Gold Stone.) was also a fantastic area to find sharks. The topography of the ocean floor there means there are deeper areas described as great white shark corridors, where the sharks used to patrol waiting for the seals to leave the island. These deeper areas allowed the sharks to hunt more efficiently, by utilizing a vertical approach and catching the seal by surprise (a hunting behavior known as breaching). But these areas are now also overgrown with kelp beds, potentially disturbing their ability to patrol and hunt.

This has caused a change in white shark movements as white sharks are now spending more of their time inshore in our bay, rather than around the Island where they used to hunt and be viewed for at least six months of the year. Furthermore, the number of white sharks in our bay has decreased significantly. Whilst this is most likely in part due to decreasing population numbers on the whole around South Africa, the overgrowth of kelp and subsequent inability to catch seals may also be playing a role, as there is not as much food available to the sharks in the area.

There seems to be potentially two main reasons for this overgrowth of kelp. The first being changes in weather patterns that have been observed. Along the southwest coast (where we are), there has been an increase in duration and intensity of southeasterly winds, which in turn causes large-scale upwelling of cold nutrient rich water that is perfect for kelp growth. We have observed that the water stays cold throughout the year and the southeasterly winds are more persistent, and this could be a factor contributing to the kelp growth, as they prefer this cool nutrient rich water.

Secondly, we believe that abalone poaching is also contributing to kelp growth in our area. Abalone is a sea snail that has an incredibly lucrative market, which is thus unfortunately causing a high level of poaching especially in the Gansbaai area. As poaching has increased and abalone populations have decimated, the kelp appears to be growing more and more. Abalone eats the kelp, and it has been observed that not only do they eat the broken pieces of kelp that fall off but also graze along the rocks eating baby kelp plants, thus reducing the spread of kelp in an area.

With most great white sharks not willing to swim through kelp as they don’t swim through areas narrower than the length of their dorsal fins (as observed by research on the SharkSafe Barrier) due to the risk of getting stuck, the thick kelp forests that have grown in these great white shark hotspots, appear to be having a substantial impact on their movements within the bay, their ability to hunt and on the abundance of great white sharks in the area. 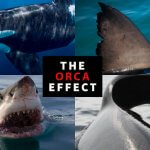